Thoughts of a weak and feeble woman 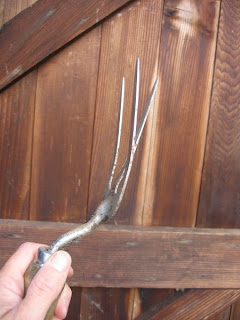 Boy, that earth is tough up on my allotment! I do this all the time but I'm also unable to bend it back again so I've had to bring it home for J to do. This sort of thing makes me feel a bit puny and useless (not a good feeling) so I've gone all pathetic now, with a list of "things I haven't been able to do without the assistance of a big, strong man" running uncomfortably through my brain. Some of them are understandable, I could never get the battery out of my old 2CV when it needed charging every weekend (too heavy): only last week I spent all of one afternoon with my arm down a drain painstakingly unblocking it, except for the last little bit (arm too short) and even when I was at school, donkeys years ago, I remember having to wake my parents up to get the lid off the Marmite so that I could have breakfast (general puniness) The list goes on.....

Happy gardening (if you're big and strong enough)
Posted by Nicky at 1:22 PM No comments: 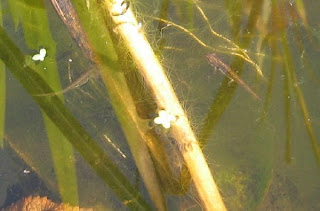 You may have to click on this image to make it big enough to see these little newtlets properly. It was difficult to get close enough to take the picture without the camera's shadow falling across the pond and scaring them away.

If you can't see, just let me say that they've still got those feathery external gills on their necks and they were both less than an inch long, head to tail. There were quite a few enjoying the afternoon sun on the water today.

No picking today, unless you count collecting some seed pods from the sweet peas. Just some tidying up. It was gorgeous and sunny again but noticeably colder. It's 14 degrees right now, so it was probably a bit higher than that, but not much.

At this time of year I feel more in control of the allotment. I don't know that I actually want to be in control of it but in the main growing season I often feel as though it's in control of me. Everything grows too fast for me to do the right thing at the right time, whether it's pinching out tomatoes or getting to the bindweed before it envelops the fruit cage. Now that everything's slowed down again, it's hit the speed I can work at to keep it all ticking over nicely.

I've started weeding the beds as I pull out the dead and dying summer crops. When that's done I shall put in some green manure, a rye grass that can be planted over the winter. There's a fair bit of clearing up to do before I can sow it though.

My fanciful ideas last time about romantic assignations on the bench were squashed by J who said that he'd probably moved it while he was strimming. How very prosaic.

Happy gardening
Posted by Nicky at 3:22 PM No comments:

You can't tell this but I'm typing the blog today with bright pink hands. I've been peeling beetroot and although I washed several times, I can't get the stain to go away! I hope it's gone by the time I go to the cinema tonight. I like to think I look presentable, (if not stylish) when I go out but I suspect that tonight I'll have to settle for "interesting".

The beetroot had been sitting around for ages so I decided to cook it and use it in sandwiches. I think it goes very nicely with corned beef (except I haven't got any)

Today the allotment was bathed in glorious sunshine. I picked runner beans, artichokes, raspberries, one courgette and dug up more beetroot and some parsnips. Then I decided to cull the butternut squashes as they've gone as yellow as I think they're going to get. They may carry on ripening in a basket at home, I don't know.

I loaded all this bounty into a huge bag and set off down the path and almost immediately fell over a tussock and threw my little pot of raspberries up in the air. They went everywhere. Mostly they disintegrated and the long grass seemed to be scattered in tiny red beads. It was very difficult to pick them up again so I expect some lucky field mouse is in for a feast this evening.

So, while I recovered, I sat for a while on the bench by the pond and planned a big pond clear out. (You can't see the water) The bench has been moved a bit, I wonder who sits there when I'm not around? It seemed a bit steadier on its base so maybe I'll leave it where it is. The direction is now right into the sun so I shut my eyes and basked for a bit. Lovely. Whoever was there before me had dropped a pink rose by the bench and there was a plastic bottle top. My mind turned to a romantic tryst with wine and roses but it's probably just the top off a bottle of plant food or ant killer, blown there by the wind. The only people who have keys for the allotments are the plotholders, who are likely to have any romantic trysts on their own allotments, not mine!

Happy gardening (was it you?)
Posted by Nicky at 4:31 PM No comments: 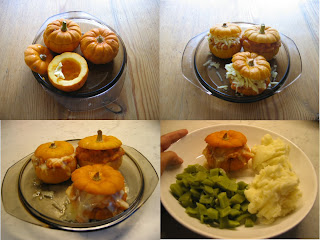 J has just been very patient with me and helped me to make this composite pic of tonight's dinner.

The hand is deliberately left in because the scale is important - these things are tiny! The recipe is basically the one for Mr Grumblebum I gave in October last year, but tonight we called it Grumblebaby because of the size. The squash variety is called Jack be Little and they weren't kidding.

Note that I'm only cooking for three now that Ed's started at uni. It's so strange without him - nice that he's growing up and able to go off and do all these things, but strange and quiet for me all the same.

Happy gardening (it helps with empty nest syndrome)
Posted by Nicky at 8:29 PM No comments: