Mmm bliss. We've finally had a bit of summer. The weekend's been great, the sky's been blue, the wind's dropped a bit and a weird bright thing started shining in the sky. I couldn't remember what it was when it first appeared but we've really enjoyed it beaming down on us. I may even get a tan!
I wish I'd had the camera with me though, I had a close encounter with a sleepy fox who was very unfazed by me as I crashed around in the undergrowth of an untended allotment looking for raspberries. He stood up and looked at me, no further than a few feet away, and decided that I was no threat so he curled up again and closed his eyes. He was an adult fox, not the young one I've been looking for, so I think he's learned that the people he meets on the allotments are not going to chase him away. I have seen the young one now though, a few days ago. As I was leaving, a slim young adolescent fox streaked across in front of me and made for the woods. I didn't get a close look but he was a fine looking young animal. Some of the older ones get mange and their tails lose that bushy, foxy quality that is so very appealing.
I also wish I'd had the camera yesterday evening when, as we were coming towards the end of a lovely day, there was a loud thundering roar of engines and we looked up to see an amazing sight. A wartime flypast of a Lancaster bomber, a Hurricane and a Spitfire, flying in tight formation over the allotments, seemingly just for us! J says it was the Battle of Britain memorial flypast. They went round twice, not quite so low the second time but we still had a ringside seat. Fantastic. And not recorded on the camera. Shame!
Posted by Nicky at 4:38 PM No comments: 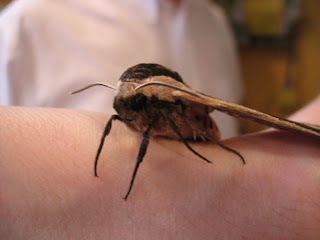 I nipped up to the allotment yesterday to pick a few beans and courgettes for dinner. It's been raining for ever so I wasn't expecting to be long but it was dry enough (in wellies) to just wander around for a minute or two. I was looking at some salad leaves that have started to bolt when I saw a huge bug grasping onto one of the leaves. It made me jump at first because I nearly picked it!

I took it home in one of the boxes I use for fruit, clear plastic with air holes, the leaves came with it in case it wanted them to eat. The boys have finished school for the summer so they were around and the older one promptly identified my moth as a privet hawk moth. I was dead impressed with his knowledge, he had a friend with him who thought he was blagging so we Googled it and lo and behold! Absolutely correct - a privet hawk moth it is!

When J came home from work we spent some time taking bug portraits and let it walk about on our hands. It weed copiously all over the kitchen table when it came out of the box! You wouldn't think moths could hold that much liquid! Finally I took it out into the garden and let it climb onto a tree to finish sleeping. I'm hoping that as dusk fell it will have woken fully to fly free.
Posted by Nicky at 9:35 AM No comments: