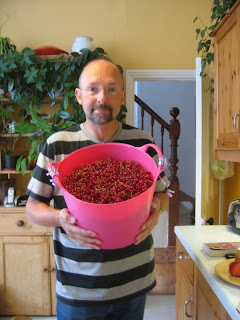 Doesn't he look pleased with himself!

When we got back from our holiday there was a lot to do in the way of picking. The redcurrants (only some in the picture, not all) had got to that very overripe, deep red - verging on dropping off the branches stage that meant we had to harvest the lot all at once. J kindly did it, hence the pic.

The redcurrants are being made into jelly in 3lb batches. The jelly recipe is very simple, just a lb of sugar to every pint of redcurrant juice. Yesterday I tried to make more than that in one go but my pressure cooker overflowed at one point so to keep it less messy I'm going back to just 3lbs at once. I would have made a slightly posher recipe that adds port at the last minute but unfortunately it seems that the port that I knew was in the cupboard had mysteriously disappeared by the time I looked for it. Funny that. J says it must have evaporated. Anyway, there's an off license at the end of the road so I think maybe the person who evaporated it should nip down and get a bottle while I start off the next batch! 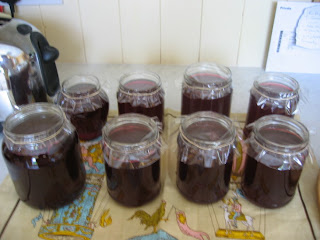