This week I've been mostly having a lurgy. I'm still ill and I'm fed up with it now. There have been plenty of bright intervals when I could have gone to the allotment with a tray of broad bean plants to plant out but I haven't been able to face the walk up the hill.

I've started some seeds off though, in between coughing fits. I've put in some aubergines, peppers, two different types of tomatoes, sweetcorn and courgettes in trays inside, and leeks outside on the back steps.

We also rented a movie, Grow your own, which I can thoroughly recommend. Set on a community allotment, it tells a story of the healing power found in nurturing a patch of soil as experienced by some emotionally scarred asylum seekers. I understand it was based on a real life project and it had a good mix of odd characters who, incidentally, weren't played by any actors that I recognised. The asylum seekers and the British allotment holders all had to deal with each other's presence, the petty bureaucracies of the allotment rules and the intrusion of a mobile phone mast and it was dealt with in a way that felt rewarding without being sentimental. I can well believe that having a patch of land to "grow your own" could be the best therapy of all for long term healing and recovery of a sense of purpose.

Now for some short term healing. Another lemsip maybe? 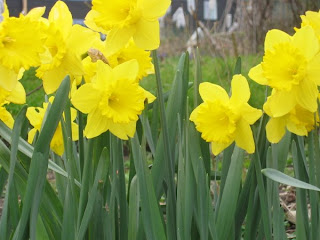 I've been busy. Really busy. The last few weeks have flown by and I've had no time to visit the allotment or appreciate the gorgeous daffs that I'd planted last year next to the hut.

J and I nipped up today for a quick look around and I was pleased to see that the bulbs had produced such a lovely show, and that I hadn't missed it all. The little tete a tete daffodils under the old apple tree aren't ready yet so it looks as though I'll see them come up too.

Today I "planted" a huge plastic cloche. I've got some lettuce seedlings in a tray at home and when they get a bit bigger they're going under the cloche. Also waiting to go into the ground are the broad beans that I've been protecting from marauding squirrels. They're in pots on a shelf behind some nasty spiky wire netting and so far, touch wood, they've been ok. It's mostly too wet to plant anything yet anyway.

Hopefully, this weekend I'll be able to start off lots of seeds in trays. I usually put them on newspaper all over the dining room floor for a month or so but until I'm able to get rid of a very large stained glass window that's already taking up all the spare floor space, I'm a bit stuck for somewhere to put them. I don't really want to deliver this window to its new owner yet because it's one of five and I want to make sure they all look right together but I can see a time coming when I'll hit a problem! They'd make lovely colourful cloches though! There's an idea....