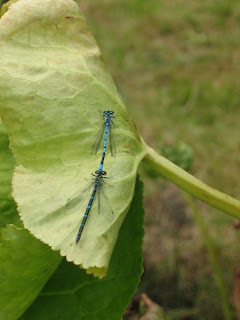 I've just finished primping and tidying the allotment for my birthday barbecue and I spotted these two damselflies visiting the pond while I was taking a break. Pretty things. There were several pairs of red ones too. There were also seven large frogs sploshing about, all so intent on their own business that they didn't seem to mind at all as I crouched over them to take photos.

Plan A is to spend tomorrow afternoon ferrying camping chairs and tables, fairy lights and bunting etc up to the allotment and spend tomorrow evening having a jolly time eating and drinking as the sun goes down. However, plan A looks like it may have to be superceded by plan B, which involves obsessively looking at the weather forecast every ten minutes and ending up cooking a giant paella in the kitchen at home.

I wonder what plan C is? 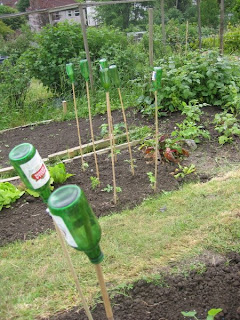 What do you grow on yours?
Me - I'm growing a small forest of beer bottles. As I've said before, I've had my allotment for many years now and although I very rarely drink any beer while I'm there, somebody has, because I never run out of bottles when I want to put one on top of a cane. I blame the mice in the shed. It can't be J, surely?

Bottles on top of canes are a good idea because I am exactly the sort of person who's going to get a cane in her eye whilst bending down to ground level.

I've noticed that the surrounding allotments have an interesting variety of cane tops. Some people have used tennis balls that have lost their bounce, one allotment is a sea of plastic milk bottles and the posh people with the greenhouse have even bought specially designed rubber things to stick on theirs. I prefer the "recycling" approach and try not to buy specially made bits and pieces if I can make them.

Still, better than a poke in the eye with a sharp stick! I don't know why all the ramshorn snails were sitting on top of the water lily leaves but they were, lots of them, looking as though they were basking in the sun. I wouldn't have thought it was something snails do. It wasn't just the ones in the photo - this was a close-up so you could see them clearly. The whole pond was covered in them. Very strange.

They are all the progeny of ten that I paid for in the garden centre years ago, when I bought the plants to stock the pond. Imagine a gardener paying for snails! They've done their job very well though. What with the rampant water lily (triffid) and a few oxygenating weeds, our pond doesn't suffer from that annoying filamental algae or blanket weed that spoils the appearance of so many ponds at this time of year.

We're having a busy week at the allotment. Last night I tucked a bed of straw all round the strawberries to help keep the ripening berries away from slugs and damp earth and then J and I started netting them, but the net has turned into a tangled muddle so we were only able to do a small strip. I need to sort out the netting soon though. We found a big bit and draped it across the jostaberries. I'll shut the fruit cage door soon too. I only close it when the fruit is ripening because the birds do quite a lot of good picking insects off the bushes, so I don't mind them in there most of the year.

There's always such a lot to do in May, planting out, watering, weeding, feeding the growing plants and continuing to sow as much as I can fit in so that we have a succession of harvests. I put in another six runner bean plants today, sown in pots seven weeks after the first batch. the theory is that we have runners over a longer period - however, I've done this before and what actually happens is that they all catch up! A second row of courgettes also went in today. I planted far too many seeds this year and I'm left with more plants than I can use. I'll hang onto them until I'm sure the ones I've planted out are established and then I'll give them away.
Courgettes anyone?

Happy gardening
Posted by Nicky at 4:27 PM No comments: 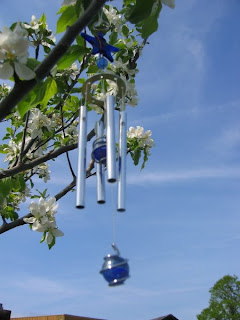 Here is an entirely gratuitous picture of my wind chimes hanging in the apple tree. It was windy, so they were moving and have a bit of a blur to them, it's not your eyesight.

When I go to the allotment, one of the first things I do after I've offloaded my rucksack is to get out the three hanging things I keep in the shed. There's a long string of red suns and moons, a clear glass icicle and this pretty blue wind chime. I don't think I've got enough hanging decorations yet so I expect some more will find their way into my collection. I did have the idea of making some stained glass ones, but so far, they haven't made it up to the allotment, although there's one in the garden at home.

They give me pleasure just because they're pretty. I think it's very much a female thing though, I don't suppose J even notices them! 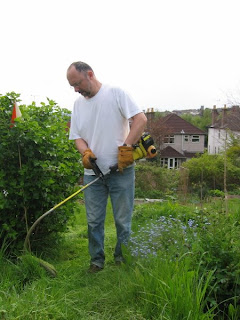 A lot of hard work was done today. Mostly by J who strimmed the lower part of the allotment, all round the fruit cage and the pond, and then re-strimmed the bits he did last weekend, while I cut round the edges and put in some more potatoes.

I know I said I wasn't going to plant potatoes this year but most of them have gone into big pots at home.I've got three big pots of them outside the front door (I know most people prefer rambling roses or honeysuckle but we've got potatoes) I took a horrible ugly plastic tub up to the allotment today and put even more potatoes in it. There are just a few left over and they've got to go somewhere so there will be a few on the allotment, but not many. I can't spare the space.

I've been digging on and off all day too. I'm feeling completely shattered and now I've got to go and take a shower and get ready to go out to a party and what I really feel like doing is crawling off into bed. Why do I always do too much all at once? I know it's stupid! Duh! Right, I really must go and get cleaned up. Oh, I know, I'll just cut the lawn first......

Happy gardening (and grass cutting)
Posted by Nicky at 5:30 PM No comments: 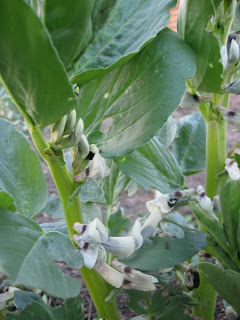 Some of the broad beans are looking healthy but most of them are still very small. I got right down next to this one, using the macro setting on the camera and the scent from the flowers was absolutely gorgeous. They should bring out a perfume of it. Eau de Bean.

I was only up there for an hour this evening, until it was too dark to do anything useful but if the weather's nice tomorrow I need to carry on weeding. It's a never ending job really, like painting the Forth Road Bridge (so I'm told)

While I was having a look around tonight I noticed footprints all across the raised bed where I've planted carrots and salad onions. Great big welly prints. They've even snapped the plant label saying "carrots". This is NOT ON! Stick to the paths! Grrr.


Happy (grumpy) gardening ...and keep your feet off my seedlings!
Posted by Nicky at 9:30 PM 1 comment: