I've finished grovelling among the leeks pulling up individual grass roots with tweezers (well, hands) Whew. Now for the rest of the allotment, which is now looking very tatty in comparison.

I've been able to spend an hour or two several times in the last few weeks and although I've been essentially face down in the leek bed most of the time, it really has been very pleasant. Lovely autumn sunshine.

Quiet though. Not many other people working there, which is probably why I was able to have this interesting experience a few days ago. As I arrived, while walking past Margaret's allotment, I heard a loud sneeze coming from the tangled ex flowerbed near the path. There was nobody there so I quickly deduced that an animal of some sort was hidden in the thick undergrowth, probably snoozing in the warm afternoon sunshine. (Good thinking, Watson) I spent ages poking my face into the shrubs calling out in an encouraging sort of way, but I completely failed to find the mystery sneezer. It definitely didn't escape while I was watching, but it was so well hidden that I've still no idea what on earth I was talking to. My best guess is a fox. They're pretty comfortable with people up there, so it wouldn't have been worried enough to make a run for it.
I can't think of anything else that could make such a human sound!

Happy gardening (and wildlife mystery solving)
Posted by Nicky at 5:17 PM No comments:

No photo today, I'm afraid. Just a quick line to record that the leek weeding has started (painfully slowly) the plum tree was pruned and wound paint slapped onto the fresh wood where the branches were cut. I also picked a good pile of beans, runners and french, two artichokes, spinach, raspberries, salad leaves, rocket and another little orange pumpkin.

While I was there I met an allotment neighbour who tells me she is giving up after 48 years. 48 years! For the whole of her life in Bristol she's been climbing up the hill to her allotment, tending the ground, harvesting her crops and looking out over the city. How things must have changed since 1960. The city has grown immensely in that time, spreading out across the surrounding fields. But almost more of a threat is the way green places inside the city are disappearing so quickly under new buildings . Back garden development is rife. There's a new secondary school rearing up behind us instead of playing fields. Urban allotments, once seen as an important food producer for the country, became unpopular and were used as building land. With the current allotment revival we must take the opportunity to make sure that these oases aren't swallowed up in the inexorable expansion of the city. Thank goodness for people like Margaret, who just kept on growing her vegetables, keeping her allotment going for all those years.

Happy gardening (for as long as you can)
Posted by Nicky at 2:56 PM 2 comments: 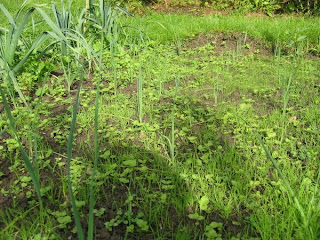 This probably looks like a grassy field. It isn't supposed to be, it's my leek patch! The compost must have had lots of grass seed hiding in it and over the last couple of weeks it's all germinated and grown into a fine lawn.

Grass is terribly difficult to weed out with a hoe so I'm now facing the delightful muddy job of hand weeding this lot.

I'm not looking forward to it, but if it's dry enough at the weekend, I'd better have a go before the grass takes over completely. I could almost sell it as turf! Leeky lawn anyone?

Happy gardening
Posted by Nicky at 10:49 AM No comments: 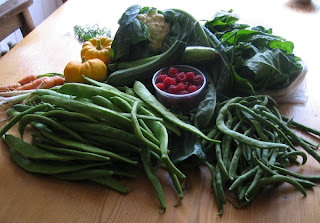 I'm pleased with this lot. It includes the first cauliflower I've ever grown (thunderous applause) two of those little pumpkins, carrots, spring onions, courgettes, spinach, one thin parsnip, mounds of runners and french beans and a pot of those autumn raspberries I planted last October. The raspberries have been good so far, I'm getting a pot this size every two to three days - not overwhelming like the beans, but a lovely treat.

I've frozen lots of beans this year, blanching them for two minutes before open freezing them. It's more time consuming this way, but so much easier when you're cooking and you want to use a few frozen beans - you just shake out as many as you need, because they don't form a solid lump in the bag.

The earlier courgette glut has paid off too. I left some on my friend Yvonne's windowsill every few days during its height and now I'm starting to get some of her cooking apples in exchange. Isn't swapping great?

Happy gardening
Posted by Nicky at 9:27 AM No comments: