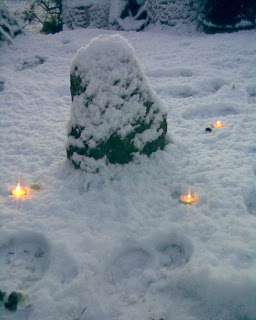 I took this just before sunrise on the winter solstice. The sky was clear, fresh snow covered the ground and the air was cold. It was beautiful.

There were fox footprints and bird footprints but I was the only human visitor so early.

Happy Solstice. The days get longer from now on.
Posted by Nicky at 9:03 PM No comments: 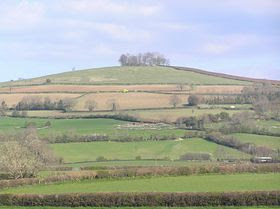 Last night, J and I kipped on a friend's floor, after a Christmas meal out with the balloon syndicate. Where Ade lives is a real trek across the city from us but guess what greeted me when I looked out of his window this morning. Yup.

This afternoon the distant horizon was misty, so as I worked on the allotment, the hill was more of a ghostly presence than usual. It's funny though, I've climbed up onto it when walking the Cotswold Way out of Bath, and from there, Bristol itself looks pretty insignificant and as for the hill that's home to Kersteman Allotments, well, you can't even make it out. Just a distant blur.

Oh dear, I feel all insignificant myself now.
Happy gardening
Posted by Nicky at 7:11 PM No comments: 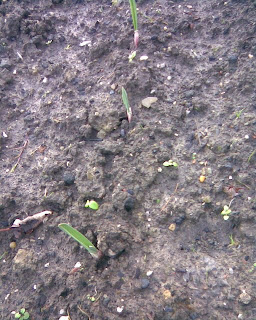 Here is the garlic, just beginning to sprout. Talking of sprouts, the sprouts are doing their sprouty thing too. They'll be ready for Christmas by the look of them. I've only got two sprout plants left now, which is probably enough.

This afternoon, hazy and sunny without any real chill to it, I dibbed little holes and popped in a packet of Aquadulce broad beans. I've just done some complicated sums (7x8) and decided that I've put in about 50. Why can't I remember my tables?

It'll be good if most of them come up but I've also got a similar amount in pots under a squirrel-proof bit of wire netting in the garden at home. The ground was overwhelmingly soggy so the poor little beans may get waterlogged. We do love broad beans though, so however many survive the winter probably won't be enough.

Walking round my allotment today, with a cup of tea steaming in my hand, I was able to take stock of jobs that need to be done soon. Because of the recent weeks of rain, the ground is sodden, but several of my mini-modules still need turning over and the weeds turfing out. The autumn raspberries will have to be cut down to ground level, one bed of unexpected marigolds can be moved to the flowerbed by the hut, some bolted pak choi can come out and I really should harvest the swedes. These don't seem to be getting any bigger so I think they've finished growing. If I leave them there, theyll probably rot. basically, the whole thing could do with a good tidy up. As always! A bit like my house too!

Happy gardening
Posted by Nicky at 4:42 PM No comments: