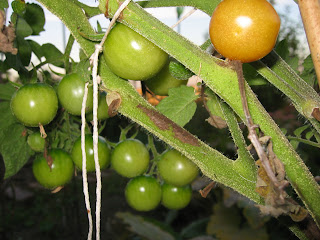 There were rumours of frost on the radio weather forecast. I'd been making a quiche with Gardener's Question Time imparting wisdom in the background and I was suddenly galvanised into action! As soon as I was able to leave the house I went up the hill and harvested anything that was ready. There was a fine haul of runner beans, two artichokes (I'm swapping those with a friend for a small rosemary plant in a pot) a courgette, two parsnips and my first ever turnip! I also gathered some mint and sage and a bag of spinach beet. I also picked a few greenish tomatoes to put in a bowl in the kitchen with some red ones. I don't know why but this helps them to ripen. The other thing you can do is put them in a paper bag in a drawer but I forget about them if I do that and find the mushy remains months later!

The plants themselves will have to take their chances if there's a frost. Usually, the courgettes die off pretty quickly but everything else should be ok for a while. The tomatoes won't like it either but they've been pretty rubbish this year anyway. After I'd cut the bits with blight off they recovered slowly and eventually I got a handful of tomatoes from most of the plants. Some just laid down and died so I grubbed them up and disposed of the bodies! ....... a pause while I look for a photo.....here are some post blight tomatoes. You can see the browning along the stem where the disease left its mark.

In some ways the cold snap at the end of the growing season is quite invigorating. I find the cold wind breathes energy into me and I start planning next year's planting. My organic seed catalogue arrived in the post yesterday so my bedtime reading is sorted out for a few days! (I need something therapeutic after taking my older son out for his driving practice every day. He's actually doing very well but my nerves get rather jangled!) The downside of autumn is the way it gets dark almost immediately after we've eaten our dinner so we tend to spend more time indoors. Having said that, I'm going to go out with the camera tonight and try to photograph the moon shortly after moonrise. It's a Harvest Moon, J says it's an illusion that it's so huge when it's low down in the sky but it's a lovely illusion and worth taking photos if it's clear.
Happy gardening (and moongazing)
Posted by Nicky at 3:30 PM No comments: 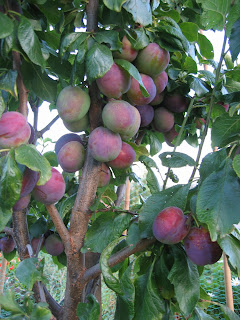 It really felt like Autumn just now, in fact, as I was about to leave and come home for a cup of coffee, I had immense difficulty shutting the hut door because the wind was so strong. Our hut is facing down the hill and every year it seems to give another lurch and tip further over. I used to think that it would be ok because on one side it's held up by a winter jasmine hedge and on the other by a big old honeysuckle but now I'm not so sure. It looks like it might be sliding between them and if it does, it'll just go rolling over onto the top patch. It would be such a mega job to clear it out and straighten it up that I've never been able to face it before but it looks like a job for this coming winter.

There were still courgettes and beans to pick along with tomatoes and one strawberry (!) but the plums I was expecting had gone. I'd netted these against pigeons so I was surprised that they'd gone, especially as they weren't visible under the leaves. The plums have been fabulous. I planted the tree last spring so this is the first year of proper fruit-bearing and I've been very impressed so far. The variety is Marjorie's Seedling which is supposed to be an all purpose cooking and dessert plum and it's certainly been good for both. It seems to be a prolific cropper too, particularly in comparison with my new apple tree (planted at the same time) and now suffering from something that I haven't yet been able to identify. Actually, that's unfair to the apple tree, the apples tasted good - there just weren't that many of them and they were teeny weeny.

Still, there's no plums left now! The last plum tart has been consumed! Lucky I'd taken the picture a week or so ago. I shall have to turn my mind to digging and other autumn tasks.

One of the lovely features of late summer/early autumn is the allotment tea party which started up a few years ago and this year's was last Sunday. J and I had been away for the weekend in our campervan but we arrived back home in time to show our (sunburned) faces. Some allotment holders had made wonderful cakes and preserves to have with our tea so we sampled some. Cylla's courgette cake was splendid. Yum. It's also nice to stop and talk to the people we normally see from a distance, busily tending their own plots. We should make more time to talk to each other, it increases the sense of community there which can only be a good thing.
Time to go, I'm afraid
Happy gardening
Posted by Nicky at 11:35 AM No comments: 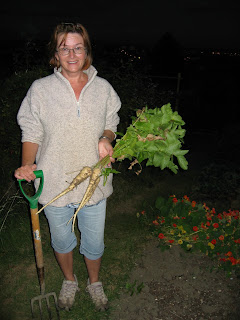 Last night we went up to the allotment at a silly time, it was only a few minutes away from sunset so we knew we wouldn't get anything done. We just went for the sake of a bit of fresh air and because it was such a nice evening.

As I walked up the path I spotted some more strawberries so I picked those, then we noticed some damage caused to our sweetcorn. Every plant has been knocked down and the cobs ripped apart and scattered across the ground. I haven't a clue what could have blitzed them so thoroughly, pigeons wouldn't have made so much mess surely? We came up with various ideas - badgers seem most likely although I've never seen them on the allotments or heard about them there. The foxes aren't likely contenders either. We were starting to say things like "warthogs" and "wildebeeste" to each other because of the way it looked as though some hefty mammal had charged about in the sweetcorn patch, shovelling the plants aside with huge tusks! My sensible allotment neighbour has netted her sweetcorn to preserve it from pigeons so maybe I should have done that too. Whatever it was (and I'm sure it wasn't pigeons) has been put off by the net.

While we were spontaneously generating names of unlikely animals it went dark on us so any remaining gardening had to be done by feel, which was a bit weird. I dug up some parsnips (pictured) but then we called it a day and strolled home for a glass of wine.
Happy gardening (mostly in daylight)
Posted by Nicky at 9:48 AM No comments: