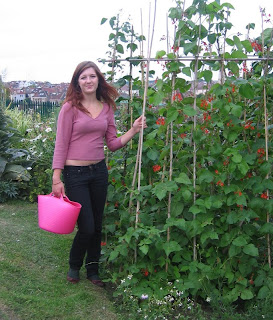 Helen was impressed to see that the beans she planted in the first week of May have now grown taller than she is and are starting to produce their first long pods for picking. We always get a good result from Scarlet Emperor, so I've stuck to the same variety for the last few years. Boring, I know, but it means we get results.

This year I was tempted to try something different when I came across an interesting sounding packet of courgette seeds, Tristar. I couldn't work out whether I'd get three different types of courgette on each plant or whether there'd be seeds for three different types of plant. It was the second option but I'm not sure it was terribly succesful, the little yellow ones are not very slugproof and we've hardly sampled them, the big dark green ones look like the ones we usually get and the pale green ones are very watery tasting. I think the verdict is that it's ok to stick to tried and tested varieties.

At the moment, the most pressing jobs are planting out the tiny threadlike leeks (now completed) and finding somewhere to put the purple broccoli and swedes that have been sitting in their little plug pots for far too long. Until the onions are lifted and the maincrop potatoes come out, there isn't any room.

Happy gardening (unless you're stuck in a plug pot waiting to be planted)
Posted by Nicky at 6:57 PM 1 comment:

When J and I arrived to do our nightly watering on Sunday evening there was a pigeon sitting on the top of the fruit cage. It seemed entirely unfazed by our arrival, indeed it put its head on one side and watched us from about two feet away. J said he thought he looked "friendly". I thought it looked like he was after our jostas. Sure enough, when we were distracted by tramping up and down the paths with watering cans, he invited about five of his mates and they all had a go at getting under the netting. I hastily picked a punnetful (crumble again) but I see that the pigeons have taken most of the ripe ones. Grr. 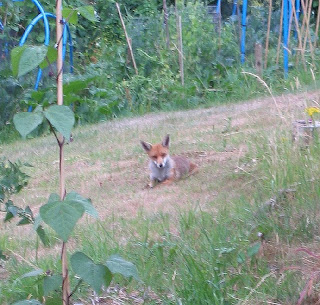 J topped up the pond water too (loud cries of appreciation from the frogs and newts) Then he called me over in a sort of stage whisper to see a fox that was resting on a grassy spot. It wasn't very bothered by me taking photos but sauntered away slowly.

It had a poor sort of tail though. I hope the mange won't come back as badly as it did a few years ago.  At that time all the foxes on the allotments were affected and suffered dreadfully. The thin tail is one of the first signs. 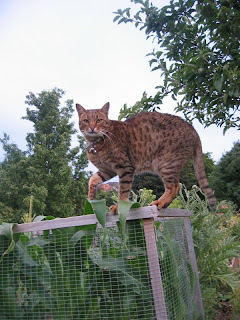 After the fox, we had a visit from Mirkin, our remaining allotment ocicat. The other two moved to the country so Mirkin is now definitely top cat.

He's a beautiful animal but J and I are slightly nervous of him because he once launched himelf at J's legs in an entirely unprovoked attack. I used to pick him up and stroke him but nowadays we admire but don't touch.

Still, he seems to be doing a good job as an extra badger guard on the sweetcorn patch.

Happy gardening (enjoy the wildlife)
Posted by Nicky at 9:15 PM No comments:

Since I last wrote, I've demolished another seat! The sun lounger in the garden gave way under me last weekend. I really don't know why they should be so easily dismantled by someone of my build! Honest! 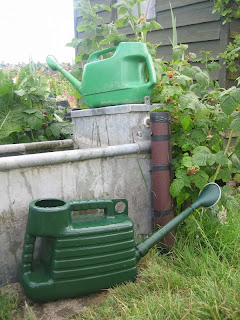 On another note entirely, Bristol, and probably most of England, has been a rain-free zone for weeks, so a considerable chunk of my evenings has been taken up with watering. To do the whole allotment takes anything up to two hours and when everybody's up there using the same water troughs, the level gets very low and the refill rate is slow. I also have to water my little garden every day too, nearly all the plants are in pots so they dry out by the end of the day and can't be left. And as for the peppers and aubergines on the kitchen windowsill....so, there's been no time for blogging because I'm too busy watering.

The strange thing is, the plants I'm carefully tending and watering don't look anywhere near as robust and healthy as these great banks of daisies. I've got them all over the place but particularly bordering the bed with the fruit trees. They started with a small plant, begged from a neighbour and they are now completely rampant. And I don't water them, ever! 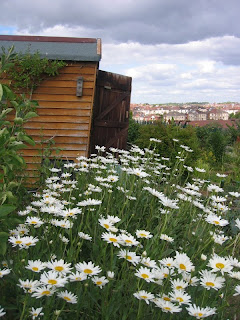 Happy gardening. Enjoy the hard work, it's good for you!.
Posted by Nicky at 9:15 PM 2 comments: